The pseudoreality show’s contestants are in town for about six weeks of filming. Head judge Tom Colicchio gave an interview recently where he spills some interesting details about the process, like the fact that he only works every other day. No, he doesn’t say where this season is set, though he does tell Max Silvestri, “I’m not as interested in that Mean Girls stuff,” and “Without giving too much away, you’ll see some real kitchen stuff this season.” Here, a day-by-day account of who’s been spotted where.

TUESDAY, August 31
Ladies and gentlemen, we have confirmation that Top Chef has officially packed it up and departed Seattle. As we learned previously, the contestants are probably back at home waiting for the finale to film and growing out assorted new hairstyles, while the editing crew sifts through infinite hours of footage. The season will likely start airing in early November.

THURSDAY, July 19
Colicchio and crew will take a break from eating at Revel and Sushi Kappo Tamura to film in conjunction with Bite of Seattle. The filming will reportedly happen Friday morning outside Fisher Pavilion, with "a ton of extras" in the mix. Bite gets under way at 11, so plan your stalkage accordingly.

SUNDAY, July 15
Another dining report; this time it's Hugh Acheson and Emeril at Madison Park Conservatory.

FRIDAY, July 13
The first rumor of contestants' identities surfaces with this piece out of Washington, D.C.

THURSDAY, July 12
News of the show has been a little quiet recently (or maybe everyone is experiencing Top Chef fatigue?), but Eater Philadelphia has this excellent post asking the show’s local alums about the dos and don’ts of being a Top Chef groupie. Spoiler alert: Kissing chefs on the neck usually isn’t cool. Remember that if you run into the contestants shooting at Whole Foods.

MONDAY July 9
According to sandwich shop Homegrown, Tom Colicchio stopped in to one of its locations and ordered this sandwich, the Reuben Revised.

FRIDAY July 6
Indeed, the (presumably Terlato Family Vineyards) wine was flowing at the new Chihuly Garden and Glass exhibition at Seattle Center Friday night. A party was set up in the outdoor garden and security guards circled the area, shooing away people who got too curious, and actually putting their hands in front of camera lenses pointed too close to the action. At around 8:30pm, Padma Laskhmi entered through the terrace outside the Collections Cafe. Sorry, I couldn’t bring myself to take a picture…it felt too creepy. But she is way taller than her handler guy. Soon after, actress and guest judge Anna Faris arrived with her husband, Parks and Recreation’s Chris Pratt.

THURSDAY July 5
The latest word from the daily rumor mill: Actress and Edmonds native Anna Faris will reportedly be guest judging an upcoming challenge. Perhaps a crazy dietary restrictions scenario a la Zooey Deschanel? Let’s hope producers have also signed on Seattle’s own Sir Mix-a-Lot for a pun-filled baby back ribs challenge. Meanwhile, Little Water Cantina owner Shannon Wilkinson shared some tales from his days as a culinary producer on the show’s Miami and Chicago seasons.

Also: More reports that the chefs are filming at the Whole Foods in Redmond. Stalk away, people.

TUESDAY July 3
The Pink Door reports that Emeril Lagasse came in over the weekend, asked chef Steve Smrstik and owner Jackie Roberts to devise a tasting menu (it included lasagne, a meatball, and King salmon), and chatted and schmoozed with diners. Meanwhile, a pair of Nosh readers wrote in with reports of the street around Melrose Market being closed off until 3am, then obligingly followed up with a blurry cell phone photo of lights and filming activity happening on the sidewalk at about 11:30pm.

Over at Eater Seattle, a tipster reported seeing Gail Simmons at Spinasse, but chef-owner Jason Stratton (a huge Top Chef fan) sadly weighed in that it wasn’t the case. Seriously, at what point do restaurants start posting fake sightings in hopes of some ill-gotten social media buzz?

Meanwhile, Eater National dropped a major round of rumors, including the presence of former contestants like Stefan Richter, runner-up from season five and Chris Jacobsen, aka CJ, of season three (photographic proof here courtesy of Nosh reader Jim—note Hugh Acheson in the background). Nosh reader Amy Hsieh also supplied the following photo, which she says is Richter (thanks Amy!). 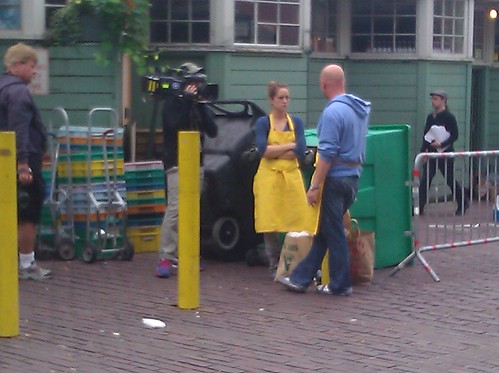 SUNDAY July 1
An awful lot of production equipment seemed to materialize outside Canlis on a day when the restaurant would regularly be shuttered. And two Nosh Pit readers were kind enough to send photographic evidence.

THURSDAY June 28
The Twitterverse was full of proof that Top Chef is filming one of its first challenges at FareStart, the much-lauded organization that provides culinary training to disadvantaged (and won a James Beard award for doing so in 2011).

WEDNESDAY June 27
Eater National serves up rumors aplenty, including Emeril Lagasse spotted near the Olive 8 hotel downtown, and crews filming at Whole Foods in Redmond. Also Gail Simmons reportedly made the rather random dining choice of Bellevue’s What the Pho!

Gail Simmons and Food and Wine editor and frequent judge Dana Cowin stopped by Canon, then the comely Simmons joined up with Colicchio and Emeril (referring to him by his last name seems wrong) for dinner at Walrus and the Carpenter.

MONDAY June 25
The madness begins! The Twitterverse fires up with news that Padma Lakshmi was spotted at MistralKitchen checking out the Monday night Arabesque menu.

The Best Burgers in Seattle

Vanilla? Not so much.