1. Oregon officials released a new report yesterday concluding that tolls could pay for a new bridge across the Columbia River linking Portland and Vancouver, WA, the Columbian reports.

The analysis concluded that tolling the proposed I-5 bridge would yield between $1.35 billion and $1.57 billion in net revenue to help pay for the $2.7 billion project. LIGHT RAIL?? That's assuming a rush-hour toll rate of $3.25 each way after 2022, and between $2.60 and $2.93 at other times, and an initial diversion rate (the number of cars that take an alternate route) of around 40 percent.

Of course, left-leaning critics of the CRC crossing have pointed out that traffic across the existing Columbia River I-5 bridge has remained stable (instead of increasing to the level that would require the much larger new bridge that's proposed); that it doesn't include critical improvements that would provide access for cyclists and pedestrians; and that toll revenue forecasts are notoriously unreliable.

Last year, thanks largely to opposition from Vancouver Republican Don Benton (R-17) Washington state legislators failed to pass a transportation package that would pay for our state's portion of the bridge ($450 million).

2. Speaking of Benton, the Columbian also reports that the state legislature's administrative officers have determined that Benton "shares blame for a series of unprofessional spats" with his colleague Ann Rivers (R-18) but that " Benton’s disrespectful treatment of Rivers interfered with her work  performance. 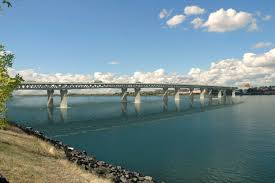 Benton, the paper reports, complained to reporters last June that Rivers had called him a "piece of shit." However, the paper also reports that Rivers' statement (which she acknowledged) came after Benton called her a "fucking liar," a "trashy trampy-mouthed little girl," and "out of control."

On one occasion, Rivers told the senate's finance and operations committe, “Don started laughing in a creepy way and I walked away to my floor seat where Don, a few moments later, followed me," leaned over her desk, and "repeated multiple times ‘You are weird’ and … ‘Weird!’, ‘Weird, weird, weird.’ ‘Just so weird!’”

Continuing to refer to herself in the plural, Sawant told the liberal magazine, "We will be focusing on city politics: we will be in many ways initiating, in many ways participating in the struggle for $15-an-hour; and other issues like housing and transit. But the media attention gives us the opportunity to show the people that there’s nothing unique about Seattle.”

4. The Stranger, still cheerleading for former mayor Mike McGinn, goes a bit over the top in their efforts to indict new Mayor Ed Murray, claiming that Murray "killed Gigabit Seattle," the company his predecessor chose to provide broadband service to a dozen Seattle neighborhoods.

That's a rather outré interpretation of the news reported by the Puget Sound Business Journal yesterday.

Gigabit hasn't had an active Seattle web site since last fall, and its Seattle Twitter feed has been silent for the past three months, the PSBJ reports.

Gigabit failed because it couldn't come up with financing for its multi-million-dollar Seattle proposal, which would have been the five-year-old company's first-ever broadband network. The PSBJ reported today that Murray confirmed the deal had fallen through. Gigabit has proposed similar systems in other cities, but has yet to deliver on a single one, including a promised plan in Chicago, where plans to provide hookups to the city's South Side have reportedly fallen through.

The company has so far failed to pay a relatively minuscule $52,000 bill to the city of Seattle for services city employees have provided.

Filed under
On Other Blogs
Show Comments

Need to Binge-Watch? These 15 Shows Have Seattle Connections

30 Seattle Events to Catch This Fall