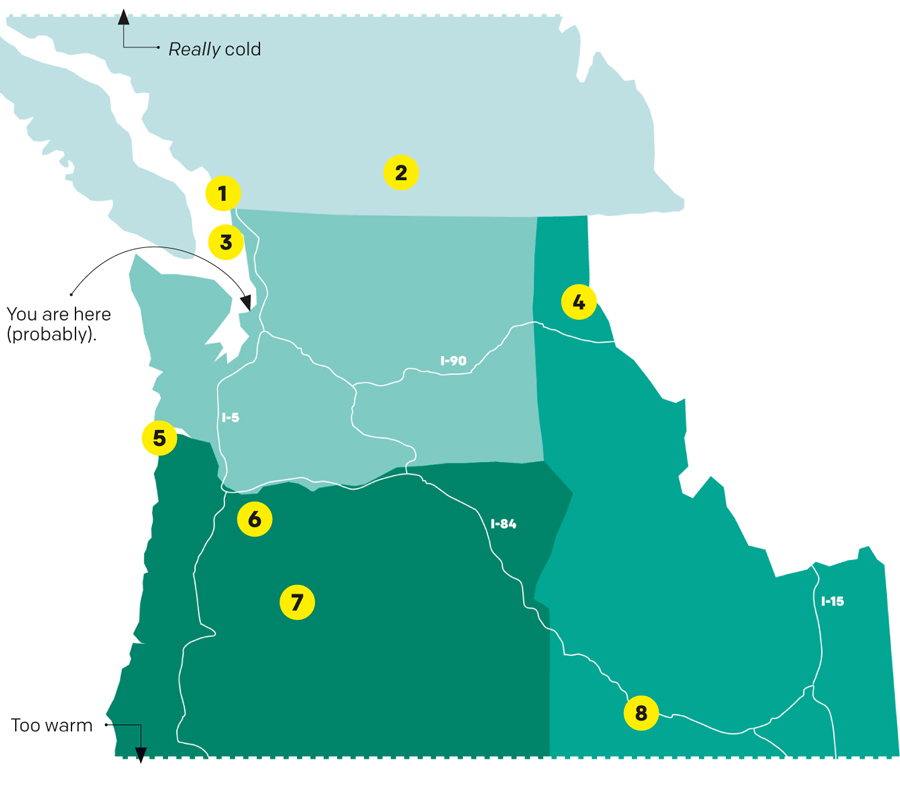 More than 60 percent of the Vancouver, BC, suburb is of Asian descent, so its citywide Chinese New Year fest starting February 2 is massive, including a flower bazaar and dance and drum performances for the Year of the Sheep.

Eleven of Canada’s best chefs prove that they can whip up dishes even better than poutine and doughnuts at the Canadian Culinary Championships finale February 6 and 7.

Waiting was the hardest part, but after January 5, Washington State Ferries will finally begin taking reservations for daily trips to San Juan Island.

At the ski area’s annual Winter Carnival, the highlight is the January 18 Wife Carrying Contest, which is, no kidding, an international sport that challenges men to carry women 100 feet.

At the 18th annual Fisher Poets Gathering February 27 through March 1, fishermen recite their best odes to elusive swimmers while ships and canneries open their doors for tours. fisherpoets.org

To balance the ice-carving competition at Oregon Winterfest February 14 to 16, there’s an artisanal fire pit contest that awards the best flame display.

Opening in January, the Twin Falls Visitor Center teaches about  the Snake River Canyon geology, history, and, with its view of the 486-foot bridge, how crazy the local BASE jumpers are.

This feature appeared in the December 2014 issue of Seattle Met magazine.

This Mother's Day, Treat Mom to Takeout or Delivery in Seattle

Cans of Manny's Pale Ale Arrive in Stores This Week

Hello Robin's U Village Location Could Open in July

The Fight to Fund Seattle's Arts

We Got This, Sports

Tired of Covid? Here’s What Else Is Going On.

Is Seattle Wildlife Actually Behaving Differently While We Quarantine?

Seattle Spring Fashion Is Anything but Binary

Can Masks Be Fashionable?

What the Hell Should You Do About Your Quarantine Hair?

The Great Outdoors is Open for Business, Sorta

Don't Go to the Beach for Memorial Day

It's the Perfect Time to Bird-Watch in Seattle

Inslee Extends 'Stay Home' Order through at Least May 31

Washingtonians Should Brace Themselves for Staying Home Beyond May 4

What Is It Like to Live in an aPodment During Covid-19?

Zillow and Redfin's Guesswork Has Changed How We See Prices