I'm not sure who to compare the heckling crowd that showed up at Friday's city council meeting on homeless encampments to.

The crowd's rhetoric against spending tax dollars on "attracting more unsheltered people" and against not requiring homeless people to be accountable for receiving help was redolent of  Reaganism; ironically, many experts say the deep social service spending cuts that began during the Reagan era is at the root of the modern homelessness crisis.

And the jeering and catcalling at progressive council member Mike O'Brien (and at a spokeswoman from the ACLU)  had a tinge of Trumpism to it as well.

In a local political season that has included white Bernie Sanders fans coming unhinged when Black Lives Matter protesters had the chutzpah to shut down a Sanders speech, to single family homeowners adamantly opposing any changes in zoning that would permit multifamily housing in their neighborhoods, to the current fuming POV that criminalizes homelessness, the mask has come off the face of Seattle liberalism many times lately.

Certainly, Seattle's Sawant left has displayed bad manners itself at council hearings too, and I've been happy to point that out—and credit council president Bruce Harrell for handling it well.

But in this instance, standing up to the city's so-called neighborhood faction, council member Mike O'Brien, who's borne the brunt of the anger against homeless camping, deserves editorial applause for both the way he conducted himself on Friday and for the substance of what he actually said. 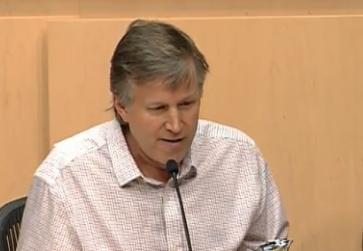 O'Brien: I want to touch on the issue around park land. Council Member Burgess, you've talked about how the parks land and the SDOT right of way is held in public trust. That is accurate, and that is something that is really important to me to uphold too.

The challenge I run into here is that if I start from the place on this ordinance of saying the number one objective is to make sure that we continue to hold all park land and all SDOT right of way in the public trust for the use it was intended to, that leaves us a challenge. Because the reality is, we don't have any land, any public land that's held in public trust for homeless people.

And I am committed to the vision that I think we all share, that as soon as possible, having enough housing and enough shelter, so that no one in our city has to live outdoors. And I've worked on that for the past number of years, and I will recommit to working as swiftly as possible to make that happen going forward.

But tonight there are thousands of people in our city that are going to be sleeping outdoors without shelter, and my legislation starts from the place that those individuals have a human right, have a constitutional right to sleep somewhere.

Some claps mixed with heckling

And that is the center of the legislation. And so, that butts up against

The lands were held in...the lands that were held

Bagshaw: Stop it. I'm going to ask you once again to please be respectful. We're going to get to public comment in just a few of moments.

Heckler: Give us our turn!

Earlier in the week, O'Brien also had a great line about the idea that he's in the pocket of the ACLU; the ACLU is pushing for strict regulations over how the city removes people from homeless encampments. O'Brien has taken up their proposal which would make the city set aside certain public space as suitable for public camping.

Getting off a sarcastic line during a press briefing on Thursday that he's doing the nefarious bidding of the ACLU, O'Brien called attention to the false equivalency that talk jocks draw between for-profit corporate lobbyists and non-profits that work in the public interest. The exchange is worth quoting at length because it documents the actual content of the ACLU's work as opposed to the generic accusation that they are villainous meddlers.

Reporter: Speaking of the community, there are a lot of people that I’ve heard from that feel that the activists [the ACLU, etc.] have your ear far more so than the tax paying average guy who can’t come to a meeting hold a sign scream. What do you say to all those who feel that you are not hearing from regular people, the taxpayers?

O'Brien: So, I am out in the community on a daily basis talking to folks, before this bill and after this bill. I’ve been working on affordable housing and homelessness since I’ve been on the council, so I understand that concerns because we get some news stories that are like oh 'Mike’s in the pocket of the special interests, the American Civil Liberties Union.'

They’re there to protect the constitutional rights of us, and I respect the work they do. They’ve also been engaged at the table making some really important agreements to this legislation that they take. We think you can do that and still be constitutional. So for instance, right now our current rules are that if we come across an encampment, we have to give 72-hours-notice before we move them. One of the changes in this bill, the legislation that I’m putting forward, is that if someone is camped on an unsuitable area—so, you show up for your kid’s soccer game and there’s a tent in the middle, when we get city folks out there we can move them immediately. We have to provide them, follow protocol also provide them access to shelter if we have it, housing preferably if we have that, any services that we have that they might need, but if all that fails we’re going to help move them from that unsuitable location to a place that is not unsuitable and we’ll transport their goods there and say you can’t be here but let us help you be here until we can find something good. We can resolve that conflict that they feel immediately.

And if there’s someone not in that tent right now, instead of having to post and everything, we say pick up the tent and moved it off the playground. Put it off to the side so that it’s still visible so when the homeless person gets off the job or gets back from the services or whatever they’ll say where’s my tent and hopefully they can see, there’ll be a note on it that say you can’t stay here, call us, we’ll help you move somewhere, we want to meet with you. Because confiscating it ultimately leads to it being thrown away for 99 percent of these folks and that doesn’t solve a problem.

But we can allow the soccer game to go on. It’s not perfect, but I think it’s a lot better than the situation that we have today. That’s the kind of clarity we’re trying to get and it requires us to prioritize. I acknowledge, that’s hard. That means we’re going to say some parks are unsuitable and others are not going to be unsuitable. And different people have disagreements about what park is appropriate. They want to say the park in my neighborhood is definitely unsuitable. We’re going to ask city government to go through that process and do our best to come up with a list. And then let’s all work together to make that population of folks that are unsheltered smaller and smaller as soon as possible.

Reporter: But you are trying to hear all of the different opinions on this?

O'Brien: I have a kid that’s got a soccer game on one of these fields on Saturday. I understand those concerns. I don’t want to see folks sleeping outside, it’s not great. The ACLU’s made the point that they think that the city’s current protocol is pushing up against they’re crossing the line, violating people’s civil rights. I think it’s important to fix them because we shouldn’t be violating the constitution which is designed to protect us all. We should be doing it because it doesn’t work. Let’s do something better and we have something that I think is better. I need to do a better job about communicating to the public about what this does and doesn’t do. But we’re going to keep working on it.

Kshama Sawant's Get Out the Vote Campaign Decided the Recall Election

What Happens If Kshama Sawant Is Recalled?

This Election Race Is (Probably) Going to Be Seattle’s Tightest