“I’m Phoenix Jones. I’m from the Seattle area. And I fight crime.” 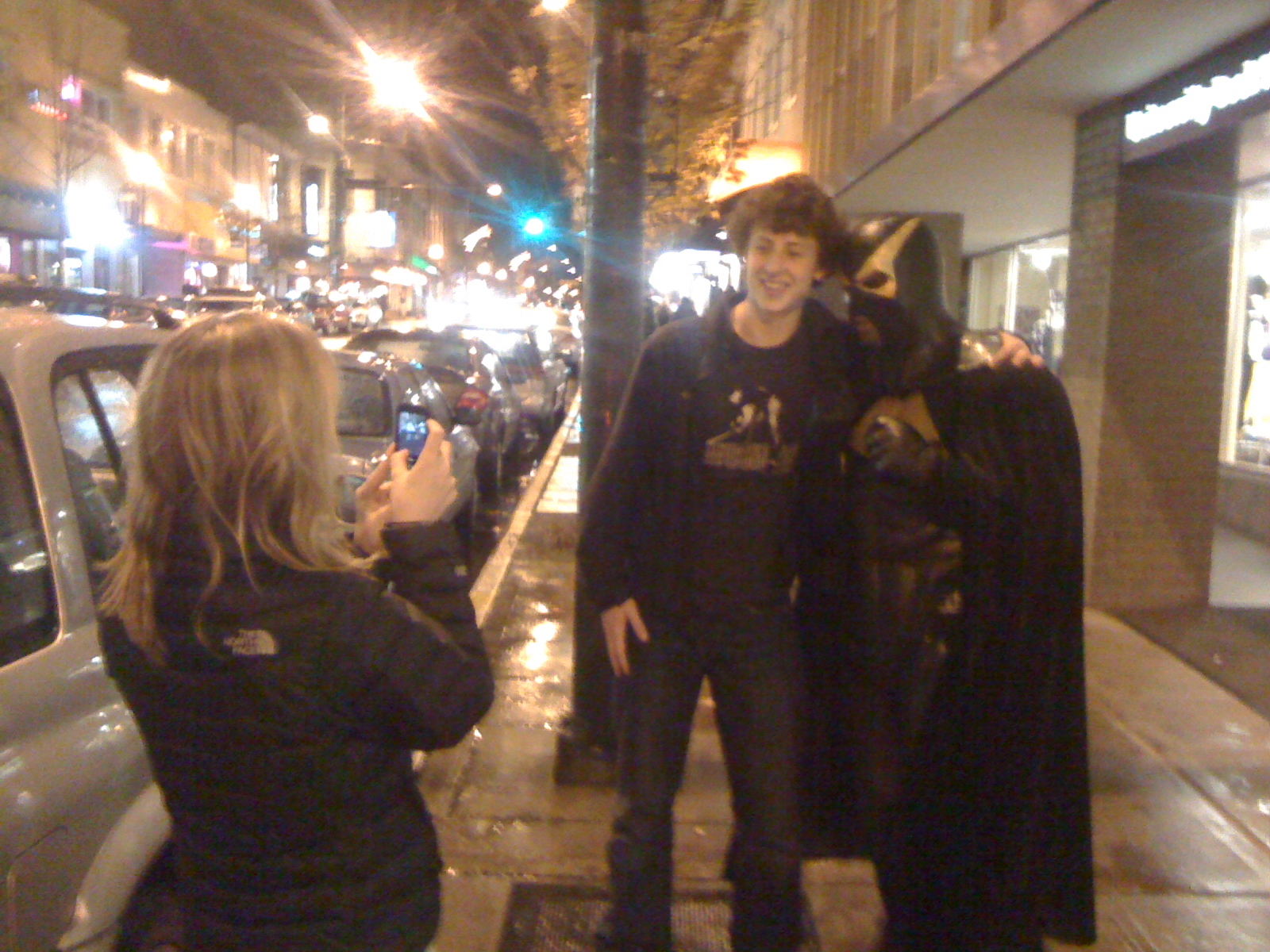 That’s how local masked man Phoenix Jones introduced himself to a group of boisterous college students sitting outside of the Chipotle restaurant in the University District Friday night, as I accompanied him on his nightly patrol.

Jones—not his real name—is the latest masked avenger to gain notoriety as part of a growing Real Life Super Hero movement: people who dress up in costumes and do good deeds, or at least say they do.

Last week, the Seattle Police Department’s Robbery unit sent out an internal memo to officers, warning them that they may soon encounter Jones or his fellow costumed do-gooders—"Thorn," Buster Doe," "Green Reaper," "Gemini," "No Name," "Catastrophe," "Thunder 88," and "Penelope,” according to the memo—who have popped up on Seattle’s increasingly weird streets over the last year.

SPD had a run in with Jones earlier this month when a concerned citizen called police and reported a potential robbery after they spotted two masked men pull their Kia Forte in to a Capitol Hill gas station with its headlights off in the middle of the night.

The masked men were gone by the time officers arrived, but robbery detectives tracked Jones to his secret lair outside of Seattle and spoke with Jones’ Godmother, who told police he "dresses up like a superhero and goes out with his friends at night and does good deeds," according to an internal police document.

Police later contacted the masked avenger, who told police "there are some nuts out there engaged in this same type of behavior” and “wanted to make it clear that they were not part of his group." Jones then agreed to come down to police headquarters and be photographed in-costume.

After learning Jones’ secret identity early Friday (a proud moment for a reporter, if there ever was one), I contacted him for an interview.

Jones agreed to meet in front of a University District comic store after dark. I expected he’d show up in civilian clothes, and I’d buy him a beer at a nearby bar while we talked superheroics and comic books. 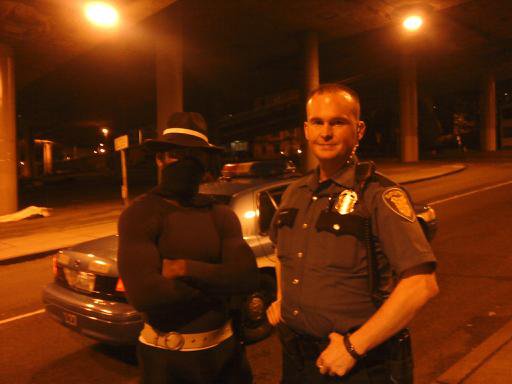 An earlier version of Jones' costume

Instead, Jones arrived decked out in mask, cape, and black and gold rubbery suit—which he claims is “bulletproof from the neck down to the kneecaps,” including a ballistic vest, arm and leg trauma plates, a ballistic cup, and sculpted plastic abs—and we headed off down University Way for his nightly patrol.

As we walk down the Ave, Jones—who’s in his early 20s—tells me how he got into the crimefighting game.

About a year ago, he read a quote from one of the Guardian Angels in a comic book which, along with a lifetime of reading comics—especially those of his favorite heroes, Nightwing and Green Lantern—apparently inspired him to take up a life of crimefighting.

“People don’t take care of people,” he says, as we walk past a crowded bus stop on the Ave.

Jones’ get-up looks quite a bit like Batman’s costume and, just like the Dark Knight, he’s a trained, title-winning amateur martial artist, and carries a utility belt stocked with a hefty-looking cattle prod-like stun gun and pepper spray, but never a gun.

He’s still working on his elaborate costume, and is developing an iconic logo for himself—possibly the silhouette of him standing atop the Space Needle, he says.

Some people on the Ave walk up to shake his hand. Someone jokingly asks Jones if “lost a bet.” One woman tells Jones he’s “creepy looking.”

Jones is an amazingly affable guy. There’s earnestness in his interactions with people on the street, and while he seems to enjoy the attention, and you get a sense he genuinely believes he can make a difference, as he gives out handshakes like they were going out of style.

But it’s clear some of the harsh words and disbelief from people on the street get to him. As we walk down the Ave, a group of young men crack wise about his costume and ask if he really thinks he’s going to do any good.

Jones’ hackles go up after one of the college-age men asks him “how well he knows his body” and tells Phoenix he’s  “going to need more than luck” to fight crime.

As we walk away, Jones mumbles that people who say things like that to him ‘typically aren’t in very good shape.”

Jones says he’s been on the receiving end from wisecracks and jeers from the late-night crowd since he went out on his first patrol about a year ago.

“I walked around downtown and didn’t see any crime,” he says. “It was pretty embarrassing actually.”

Several weeks later, Jones had his first big break of sorts when he stopped a late-night knife fight under a bridge, and had his first run-in with police.

Now, Jones says he goes out on patrol every night, always in a different location.

Jones certainly talks a big game, and claims in the last year he’s been involved in about 30 different incidents, including four violent confrontations.

He says he’s made several citizen’s arrests—including a takedown of a “Peckerwood gang” member on Capitol Hill, and a suspect who was threatening someone with a golf club near the International District.

While Jones proudly talks about his good deeds, he wasn’t able to provide many details —like names of suspects or dates of incidents—to corroborate his stories.

Jones also claims he’s been stabbed—a picture of the supposed wound is posted on his Facebook page—and says he was shot in Tacoma last year. But again, he declined to provide further details about the incidents.

When asked where he receives medical treatment—as hospital staff typically report gunshot wounds and other serious assaults to police—Jones simply said he knows a doctor who fixes him up when he’s injured in the line of duty.

Jones doesn’t seem to be worried about being killed or maimed while playing superhero, but the cops sure think that's how he'll end up.

Several SPD officers chuckled or groaned when we asked them about Jones. None were specifically familiar with him, but all questioned the saneness of his vigilantism. One officer jokingly (sort of) asked how long Jones would last at the corner of Rainier and Henderson. Another called him “crazy.”

Again, this is nothing new for Jones.

“I’m not crazy. Eccentric maybe. But I really am here to help,” Jones says, adding that he also isn’t trying to get attention for himself.

“If I wanted attention, I’d take the mask off,” he says.

While Jones seems like a genuine enough guy, it’s still a bit tough to buy into his costumed altruism.

Aside from being unable to provide hard evidence of any of his good deeds, he’s clearly not equipped to do more than react to crime, rather than deal with the root causes.

While he may be able to chase down a purse snatcher or break up a bar fight, it seems highly unlikely that he has the ability to, say, get a 14-year-old girl out of a life of prostitution and into therapy and a stable home life.

Jones’ costumed heroics are ultimately rooted in comic book morality where crime is all about black and white/good and evil, with no gray areas or contributing socioeconomic factors.

When asked whether he’d try to arrest someone he caught smoking marijuana, he said he follows police guidelines and considers it a low priority. Then he says he doesn’t have a problem with people using drugs, but wants drug dealers to “sell somewhere else.”

That’s the kind of circular logic that makes Jones’ alleged costumed do-goodery great on paper, but impractical in real life.

Jones has the right idea—as he says, people don’t take care of people—but putting on a costume doesn’t make one a hero. Hopefully he and Seattle’s new crew of costumed crimefighters can do some good without getting killed. 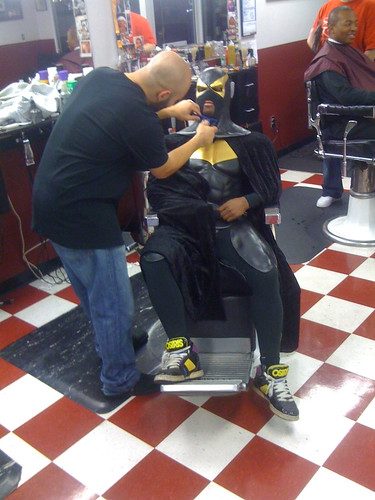