Seattle police have quietly set up emphasis patrols in several North Seattle neighborhoods in the hopes of catching a crew of burglars responsible for a rash of break-ins in October, sources tell Seattlecrime.com.

Police suspect that a group of young burglars—possibly juveniles—are responsible for at least 20 burglaries in the Roosevelt, Ravenna, and Maple Leaf neighborhoods.

The burglars have broken into a number of homes by busting out a back window—often a basement window—with a rock. They've also pried open windows and sliding glass doors to gain entry.

We're told the burglars have broken in to the homes mid-day. Once they gain access, they take the usual hot-ticket items, like laptops, video games, and cameras.

One source tells us police believe the burglars are a "younger crowd."

In October of last year, there were only 16 burglaries in Union 1, the North Precinct beat where, we're told, all the burglaries have occurred.

On top of that, burglaries city-wide were down 2% through September when compared to the same period last year.

It's not good when you see an increase like this, concentrated in one area. 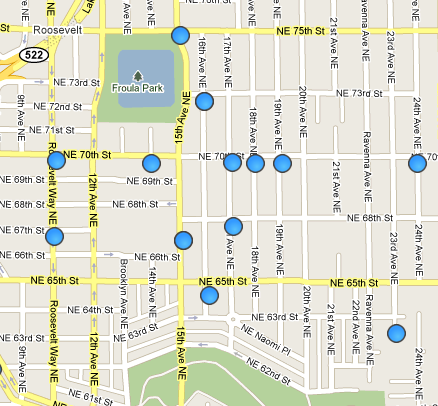 The majority of the burglaries are focused around 75th and 15th

So how can you protect yourself from being burglarized? Well, if you've already got a home security system, ARM THAT SHIT! (We've seen a few reports where homeowners simply didn't turn on their systems)

Or, if you've got an out-of-streetview window which would be easy to break and gain access to your home, go buy a $10 plexiglass sheet at a hardware store and mount it over your window.

We hear SPD's planning a meeting on the burglaries some time next month. We'll update when we hear more, and see if we can track down any other home security tips.