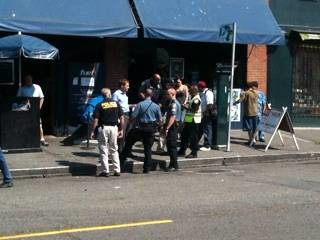 Just in from the YouReport bin, RobbyDelaware79 has the details and pictures of a pit bull attack this morning just blocks from President Obama's stop at Grand Central Bakery in Pioneer Square:

Pitbull fight that happened in front of sports bar right before arrival of President Obama.


Seattle PD are talking to man who was bit by dog right before arrival of President Obama.

Scene of drama, 2 dogs got into a fight, in front of a sports bar, right before arrival of President Obama. 2 dogs fought for several seconds, and Seattle PD police officer kicked one dog in the stomach. One man required stitches to his hand.

SeattleCrime has learned that around 11:45 AM, a parking cop saw a white pit bull attacking a brown puppy across from Occidental Park. The puppy's owner tried to intervene and sustained multiple dog bites on both hands from the pitbull. Officers detained the pit owner and animal control was called in.

Animal control says this is the second time the pit has attacked another dog, and the pit's owner has surrendered it to be euthanized. 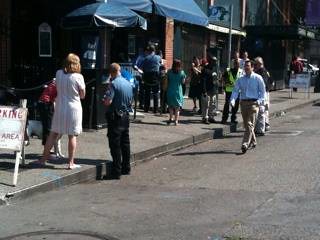