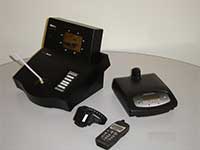 judge's order to release the boy to his father's custody—after the jail ran out of electronic home monitoring kits.

Following a May 14th detention hearing for the 16-year-old charged with breaking in to Mayor Mike McGinn Chief of Staff Julie McCoy's home in February, Judge Philip Hubbard Jr. ordered that the teen be put on home monitoring and released to his father.

As it turned out, the boy's father did not have a home phone line—required for most electronic home monitoring systems—and although YSC also uses cell-phone based monitoring kits, they had run out. So, instead of being put on home detention, the boy spent a weekend in lockup.

While a weekend in juvie probably isn't the worst thing that could have happened to this kid, the fact remains: the King County Department of Adult and Juvenile Detention doesn't appear to be equipped to deal with teen criminals in the 21st century.

A recent study by the Center for Disease Control found that 25% of homes in the US no longer have a landline. However, it appears the majority of the King County Department of Adult and Juvenile Detention's home monitoring systems are landline-based.

While KCDAJD spokesman Major William Hayes declined to tell us exactly how many cellphone-based home detention kits YSC has, he did say that they have fewer than 100.

We've contacted the King County Department of Adult and Juvenile Detention to see if we can find out how many landline-based kits they have, and whether they've run out of cellphone systems before. We're also trying to get someone to explain to us how a mobile phone can be used to keep someone in their home while they're on detention.

We'll let you know when we hear back.