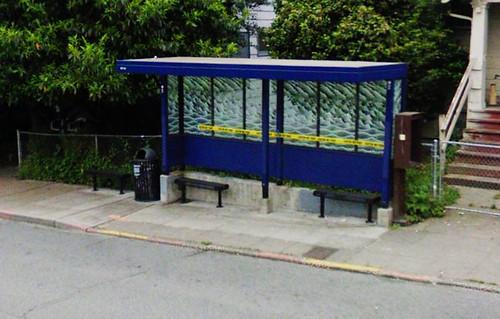 You were just at a party, and you got a little drunk. Not outrageously drunk or anything, but you take a seat at the bus stop while you wait for the 11 o'clock. Someone else walks up to the stop, but you don't know him. You look at the ground. What is all that grime that builds up on the ground underneath a bus stop overhang? It's just, like, city goo or something. You lean back, resting against the back of the stop, hoping someone with lice was not doing the same thing ten minutes ago. Pizza Hut really does suck. It sure is nice out tonight.

You hear the unmistakable sound of a diesel King County Metro bus; oh, it's not the one you need. You raise your hand and wave the bus on, and so does the man at the stop with you. You start to lean back, but then you're maced in the face and some guy starts beating the living hell out of you.

Something like this happened to a guy May 9 at the bus stop at NE 65th St and 15th Ave NE in Roosevelt, according to the police report.* A bus driver saw the victim and another man at the bus shelter, but they both waved the driver on. As the bus was passing by, the driver heard something hit the side of the bus. When the driver looked in the mirror, he saw the suspect whaling on the victim with his fists. The driver stopped the bus and yelled out the door that police were on their way. The suspect stopped the attack and ran off.

The victim said he did not know the man, who had sprayed him in the face with mace and beat him with his fists "for no reason at all," according to the report. He said the attacker did not say anything to him at any time before or during the beating. The victim was transported to the hospital with cuts on his face and a bloody nose. He said he could not identify the attacker if he saw him again.

Upon inspecting the bus, the driver saw that a window had been cracked. He said it was in about the place where he heard the noise. He did not know what caused the crack. A Metro supervisor at the scene estimated the cost to repair the damage at $200. It was unclear if either the victim or the suspect had caused the damage.

Any other passengers on the bus had already left the scene before they could be interviewed.

*That's right, I pulled that all from a police report... OK, I may have embellished many of the details.