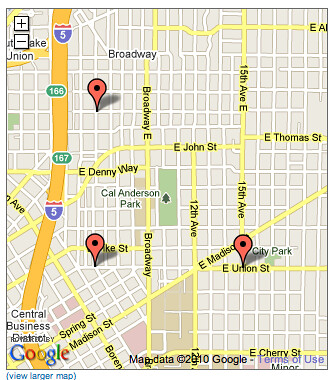 Three teens police say were working as a street robbery team have been charged in a one-night string of armed muggings around Capitol Hill in mid-April.

According to court documents, Brooks was the man identified as carrying the air gun and brandishing it as a weapon in the hold-ups. He has prior convictions for vehicle prowling, according to the documents.

Delnik is a minor but faces charges as an adult due to the nature of the crime he is accused of. He has two past convictions for robbery and another for a vehicle prowl.

Meanwhile, Lee, pegged as the driver by police, has a prior conviction for theft. She remains at large after being released from police custody following her arrest the night of the robberies. Brooks and Delnik remain behind bars.

Last week, Brooks entered a plea of not guilty on all counts but his trial date has not yet been set. He could face up to five years in jail if convicted. We are working to confirm the status of the case against Delnik.

The first street robbery happened round 12:35 AM at Summit and Harrison, followed by another around 12:45 AM at Summit and Union and another just after 1 AM at 15th and Union. The alleged street robbers were nailed near Terry and Madison when an officer noticed a vehicle matching the description of a getaway car seen in one of the attacks.

In the first attack, a man was pistol whipped and his wallet was stolen. In the second, near 15th and Union, a man was punched in the face but was able to run away without being robbed. In the last attack, a couple were robbed of their cell phone, a messenger bag and cash.

In all three robberies, victims described their attackers as two black males and said one wore a red jacket. The duo used a handgun to threaten them, the victims told police. One witness reported seeing them flee the area of the attack in a reddish car with a bad taillight, according to a police department spokesperson.

Police officers recovered one of the victim's messenger bag from the car. Beneath the seat, officers found an Airsoft pistol, according to a police spokesperson.