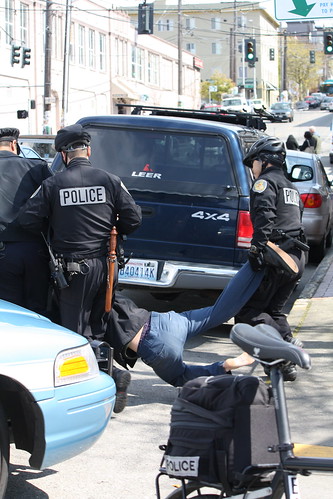 If you're in the Capitol Hill area and want to know what's with all the dudes in black marching near Seattle Central, well, it's a police brutality protest.

SPD spokesman Mark Jamieson says this was a planned event, and police crowd control units (like the police equine unit) are on scene.

Fifteen protesters in a similar march in Olympia were arrested last night after, The Olympian says:

they began throwing bottles at buildings and tried to block the streets with trash bins, witnesses and police said.

The downtown march consisted of about 15 to 20 protesters clad in black, with their faces covered in hoods, handkerchiefs and scarves. The purpose of the march ostensibly was to protest alleged police brutality, including recent police shootings in Portland and the 2008 shooting of Jose Ramirez-Jimenez by Olympia police officers.

Jamieson says there have been "no issues so far" at the Capitol Hill protest.

UPDATE: Shortly after Jamieson told us there had been "no issues," shit got raw. Capitol Hill Seattle has the details:

1:12PM - Crowd is smaller but louder and more agitated. A light bulb has been thrown that struck a mounted officer on his helmet.