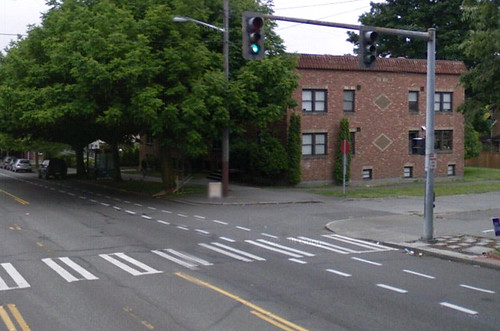 Seattle police arrested a motorist last week after the man allegedly tried swerve into a cyclist in Ballard.

According to the police report, the cyclist was heading south on 24th Ave NW at about 8:15 a.m. on April 15 when he pulled past a line of cars stopped at a NW 61st St.

The cyclist continued on through—against the light—after the crosswalk was clear.  The light turned green while he was still in the intersection, the report says.

A man driving a van then allegedly pulled up next to him, and the driver yelled, "What gives you the right?" The driver then swerved the van into the bike lane.

The biker put his foot out to avoid an impact, and his foot made contact with the vehicle. They continued heading south and around NW 58th St, the van swerved at the biker again, this time completely into the bike lane. The biker crashed his bike trying to avoid the van and went sprawling into the traffic lane, ripping his clothes. The cyclist also sustained cuts and abrasions (aka road rash) on his body.

Multiple witnesses described the van's actions as a clear attempt to cut off the biker. One of them got the license plate number of the van as it left the scene. While the officer was interviewing witnesses, the driver of the van placed a call to police reporting damage to his van from the biker. Police contacted the driver and placed him under arrest. He was questioned and released. The biker declined medical attention.