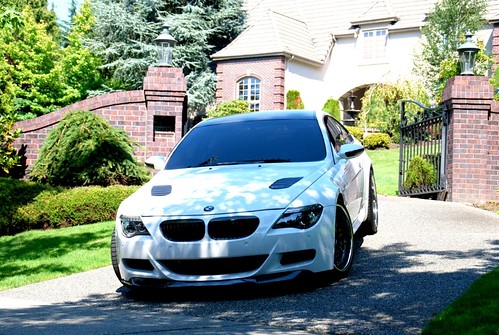 Vlad Orlovskii, the Bellevue 24-year-old who police say they clocked going at least 135 mph on the 520 floating bridge last month, has been charged with DUI and reckless driving, according to S.T.

UPDATE: We were able to obtain the police report from the stop, which says there was a drunk passenger in the vehicle with Orlovskii when the stop occurred. That passenger arranged to be picked up at a nearby gas station. Two of Orlovskii's friends then showed up before the officer could call a tow truck, and Orlovskii's vehicle was released to one of them.

Here is the pursuing officer's account of the chase from the report:


The BMW maintained an extremely high rate of speed from Lake Washington Blvd to the West High Rise. I maintained a constant 120 mile per hour and the BMW was slowly pullng away from me ... The driver of the BMW was able to stay in lane two all the way from Lake Washington Blvd until we reached the west high rise. During this time I maintained a minimum 15 car following distance. As we started to descend the high rise the BMW rapidly accelerated. I accelerated to 130 mph, which is my car's top speed. The BMW was able to rapidly away from me. I estimated the vehicle's speed to be 150 miles per hour. I activated my emergency lights. The driver moved from lane two to lane one to pass traffic. I was forced to slow to safely get by traffic. At that point the BMW had pulled to approximately 1/4 mile in front of me. I was able to accelerate to catch back up to within 20 car lengths of BMW before he made a couple more lane changes and rapidly accelerated. He eventually opened up an approximate 1/4 mile space in between us. Trooper ... advised that he was at the Toll Plaza standing by. I advised him that the vehicle was driving up the East High Rise. Trooper ... turned on his lights and the driver of the BMW rapidly slowed. I pulled in behind the BMW and obtained the registration ... The driver yielded and pulled to a stop on the ramp to 84th, partially blocking the ramp.


From our earlier story:

The BMW was seen driving at an extremely high speed moving eastbound from Lake Washington Blvd. The officer observed the vehicle weaving in and out of traffic on the bridge, moving at speeds as high as 150 miles per hour, according to the officer's estimations. The man reportedly covered 2.59 miles in sixty eight seconds.

Another officer stopped the vehicle at the 84th Ave. NE exit in Medina, and found that the driver—Vladislav O. Orlovskii—was obviously impaired.

Orlovskii's car, a white 2008 MW M6, cost at least $100,000 new without any expensive modifications. It has 500 horsepower and a v10 engine. It gets 13 miles per gallon. He posted photoshoots of the car caught in the act of being totally awesome in different Seattle locations on a BMW message board.

He also posted a YouTube video years ago where he taped himself doing doughnuts in the snow. Enjoy: