Seattle police have released surveillance photos of three robbery suspects who knocked over a convenience store in West Seattle last week and are seeking help in identifying them. 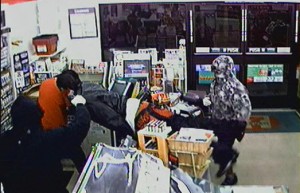 On February 4th at approximately 1:11 a.m. three unknown male suspects entered a convenience store in the 2400 block of Harbor Avenue SW to commit an armed robbery.  One suspect was armed with a black handgun.  During the course of the robbery, the victim clerk was punched in the face and roughed up while the suspects ransacked the front counter space of the store.  The suspects ordered the clerk to open the cash register and subsequently stole cash and several cartons of cigarettes.  There were no customers inside the store at the time of the robbery.  The suspects fled the scene and remain at large.

Suspect #1 is possibly Samoan or black, 20’s, approximately 6″2″ tall, stocky build, black hair (tied up in the back), with a black jacket, jeans with a large red pattern on the back and black gloves.

Suspect #3 is approximately 5′5″ tall, medium build, gloves, white and gray hoody with skull designs all over it and dark-colored shorts.