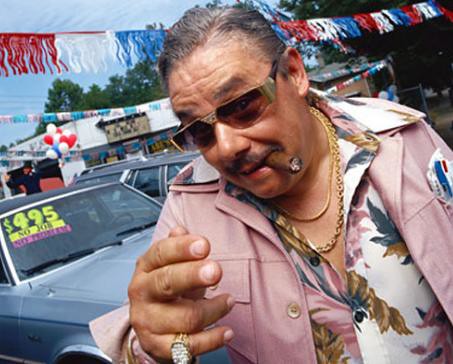 Until today we didn't think it was possible to drag the otherwise low-esteemed reputation of used car salesmen through the mud, but on December 11th a man impersonating a used car salesman swindled a Sandpoint woman out of $2,300, repeatedly groped her, and then threatened to kick her out of his car on I-5 if she didn't stop crying.

The cringe-worthy details come via a police report, stating that  the victim contacted a man, whom she had known for several months and inaccurately believed to be a used car salesman at Wild West Trucks on Lake City Way, so that he could help her purchase a car.

The man arrived at her place in a license plate-less Mercedes-Benz, and together the two drove to Wild West Trucks. Upon arrival the man told the woman he needed her money to complete the purchase of car. He then entered the showroom, and after a short conversation with a saleman in the store he returned to the plate-less Mercedes, telling the woman that there was a mix-up and her car was actually at another dealership down the road. The man then drove her to another car lot and offered the woman vehicle on the lot. However, a salesman later came out of the office and told the two that the car actually belonged to the owner and was not for sale.

The two then repaired to the plate-less Benz and left the lot. A short while later the man pulled the car over, told the woman that they should get to know each other better and repeatedly tried to expose her breast by  pulling her shirt up and grabbed the woman's crotch.

The man then drove to a Starbucks on Aurora Ave. N. for coffee, groping the woman's butt and breasts while waiting in line, while telling her that he would leave her at the Starbucks if she moved.

Later the woman began to cry as the two were driving near 130th Ave. N. and I-5, and the man told her to "shut the fuck up or he would leave her out in the middle of I-5,"and then hit her on the head with a closed fist,  according to the report.

Eventually he dropped the woman off to her Sandpoint apartment, leaving with all of her $2,300.