I will file a full report later after I have time to review my notes, but I need to put up a post right now about the big deal press briefing Senate Majority Leader Sen. Lisa Brown (D-3, Spokane) just held in her office with the media.

This was not  some dude talking on a bar stool at the Blue Moon in the U. District. This was the Senate Majority Leader in her office—chandeliers on the ceiling, brown leather couch, big wooden desk, plush red chairs—saying this: "People understand that this system isn't fair. If a millionaire in my district lived just over the border in Idaho they would pay 7.8 percent of their income, if they lived in Oregon they would pay 9 percent. In Washington state they don't pay to enjoy the benefits of the state." 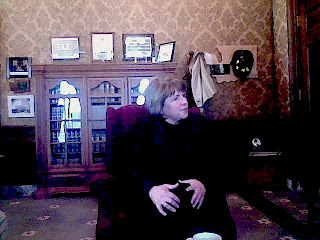 Brown went on to say low and middle income people—"the people who are most affected by the deep budget cuts"—pay a greater share of their income than affluent people to receive the services of the state.

Brown's briefing was, of course,  a follow-up to the blog post she did earlier this week where she floated the idea of a "millionaire's tax."

Today Brown said the idea was in sync with President Obama's tax policies.

Governor Gregoire issued a statement earlier in the day, saying she didn't support the idea of an income tax.

Asked about this, Brown said she wanted to have a dialogue with the governor about the idea, but ultimately, the legislature can bypass the governor and send the idea to the people in November.

Brown did not unveil any specific proposal, and said her caucus would discuss the idea sometime next week.

In unrelated news, Brown said the Senate would vote on the house buyers' bill of rights and a pay day lending bill next week—two high-profile bills that have been killed in recent years, but—watered down a bit—are expected to pass this year.

HERE'S SOME MORE ON SEN. BROWN'S DISCUSSION YESTERDAY OF AN ICOME TAX ON THE WEALTHY:

Here are  few more noteworthy moments from what I think was, well, a noteworthy sit-down with the Senate Majority Leader.

Brown said she had talked to Bill Gates Sr. earlier in the day, and said he signaled his support for this conversation. "Call him yourself," she said. "I think he'd be happy to talk about it."

Asked about potential legal hurdles (raised now by both the governor and the Republicans), Brown said she expected legal challenges, but : "If we didn't pass a bill because it might end up in court ... a lot of bills would never pass around here."

Brown said the current budget crisis—the $9 billion shortfall—was convincing evidence that there was a structural problem with the State's current tax system. She said the sales tax equation didn't provide "stability." While she didn't have the blueprints for a plan, she did say that her conception of a  millionaire's tax package wouldn't come with enticements like lowering sales or property taxes. She called any new revenue "additional" as opposed to money that would supplant other sources.

Asked if a millionaire's tax would be rejected by voters because they would fear "income tax creep" (the idea that the tax was the first step toward an across the board income tax), Brown said she couldn't change people's minds who believed the government was out to get them, but said her idea was about making the system fair for middle class people. "It's time for wealthy people to pay their fair share," she said.

She cited President Obama's mantra that people making under $250,000 wouldn't pay new taxes under his plan, saying her idea was part of the same "national dialogue" about making the system fair.

Brown said the current climate could help a millionaire's tax pass at the polls: "There is anger about bonuses and bailouts for the very people who are responsible for this crisis."

She added that she wasn't motivated by anger herself, but her caucus was "reeling from the recognition" that teachers were getting laid off, there weren't enough spots for students in our universities; and senior citizens were losing services.