The state Senate is queuing up the education reform bill for a vote tonight or tomorrow. And according to Rep. Ross Hunter (D-48, Bellevue, Redmond) the Senate added his key "core-24" or "24 credits" amendment which redefines basic education, upgrading graduation requirements to include 24 basic credits. To the chagrin of education reform advocates this past month, Rep. Hunter's amendment—which is in the House version—had been M.I.A. from the Senate bill. 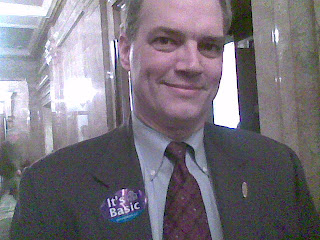 Looking up from her blackberry in the wings of the Senate this afternoon, Senate Majority Leader Sen. Lisa Brown (D-3, Spokane) told me: "We have an agreement with the House. It moves in their direction. People will be pleased."

Not everyone will be pleased. The teachers union, the WEA, has come out strongly against both the House and Senate versions, calling any reforms an unfunded mandate.

WEA spokesman Rich Wood told me this afternoon: "These bills don’t do anything to solve the immediate funding crisis facing our schools. In fact, HB 2261 actually diverts $3 million from the classroom to pay for more work groups. Meanwhile, K-12 schools are going to lose thousands of teaching positions because of these cuts. In September, there will be more students and fewer educators in our classrooms. Redefining basic education means nothing if it’s not funded."

Rep. Hunter had a different spin: "We have to have a road map for change," he said. "We have to know what we're funding."

For our running coverage of the stand off between the WEA and reform advocates over the education bills: Start here.
Filed under
Share
Show Comments