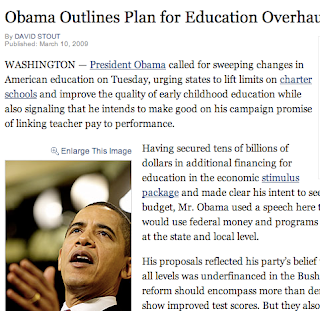 The timing was perfect for Washington state education advocates who are pushing for a stronger local bill. Education reformers, who believe the Senate's bill was vague, are now pushing to amp up the House version, so that bill can frame the discussions. (Specifically, reform advocates want the House bill to look more like an earlier version of the bill that got tabled after objections from the teachers union, the WEA.)

Part of Obama's program involves dedicating stimulus package money to education reform— $130 billion. Washington state is slated to get about $800 million if we meet certain "assurances" that Obama's reform effort has outlined. (Unlike the Bush years, President Obama is not talking about making funding contingent on "Abstinence Only" mandates. He's talking about requiring states to make real changes in terms of standards and accountability and training.)

And surprise, Washington state—if it goes with the Senate bill that passed this week— is in danger of blowing it.

"Our state has a lot of work to do to meet these assurances," says Mary Jean Ryan, Chair of the State Board of Education. Asked if we might lose the Obama stimulus money, Ryan said: "We have to take that threat seriously."

I've posted all six of the guidelines the state needs to meet below the jump, but I've flagged two of them here:

To qualify their states for Basic Stabilization Funds, Governors must submit an application to the U.S. Secretary of Education ("the Secretary") that includes assurances that the state will:

5.     Standards. Take steps to improve state academic content standards and student achievement standards consistent with provisions in the America COMPETES Act, which provides for aligning standards with the knowledge and skills needed for success in credit-bearing postsecondary course work, 21st Century jobs, and the Armed Forces, without remediation; and

6.     School Improvement.  Ensure compliance with provisions in Title I, ESEA related to implementation of corrective action and restructuring options for schools identified for these interventions.

I highlighted those two requirements (or "assurances") because they pinpoint things that are missing from the Senate bill—things that were actually in the original version before it got gutted.

The state would have met requirement No. 5, for example, if it had included the "Core 24" principle that was in the original bill. "Core 24" would redefine basic education requirements so that high school graduation requirements include course credits, 24 of them, that line up with college admittance prerequisites. Amazingly, state guidelines do not line up with those needed to apply to our local colleges and the current Senate version of the bill does not correct this.

"If we don't add real reform on the table," says Lisa Macfarlane, lobbyist with the League of Education Voters, "including making sure kids are ready when they graduate high shcool, that's a problem. And some federal stimulus money is going to pass us by if we don't."

Macfarlane says the original bills included the "Core 24" principle, but after they were replaced by "shell bills," they needed to add in the substance. "The Senate bill did not get there," she says.

Rep. Ross Hunter (D-48, Bellevue, Redmond, Clyde Hill) is proposing an amendment to the House version that will put the "Core 24" principle back into the legislation.

Similarly, that sixth item on Obama's list—mandating an intervention program to save failing schools—is missing in the current bill. Intervention was part the initial education reform bill. That bill gave the state the authority—which it currently does not have—to step in when schools were failing. The new version only talks about "potential" intervention.

1.     Maintenance of state effort.  Maintain state support for elementary and secondary education in each of FYs 2009, 2010, and 2011 at the level of such support provided by the state for FY 2006. (This requirement may be waived by the Secretary, and there are separate provisions that authorize a state, if approved in advance by the Secretary, to treat stabilization funds as state funds for purposes of separate maintenance of effort requirements in other laws such as ESEA and IDEA.  The application needs to include this request) (similar provisions apply at the higher education level);

2.     Teacher Effectiveness & Distribution. Take actions to improve teacher effectiveness and comply with Title I requirements to address inequities in the distribution of high quality teachers between low and high poverty schools and to ensure that low-income and minority students are not taught at higher rates than other children by inexperienced, unqualified, or out-of-field teachers;

3.     Data Systems.  Establish a longitudinal data system that includes prescribed elements in the America COMPETES Act, including among others having linked P-16 systems; a teacher identification system that can be linked to students; college readiness test scores; postsecondary remedial course work data, and a data audit system;

4.     Academic Assessments.  Enhance the quality of academic assessments used under Title I, ESEA through activities such as collaboration with higher education, use of multiple measures, and development of performance and technology-based assessment instruments and meet Title I requirements for the inclusion of students with disabilities and LEP students in these assessments, through development of assessments for these students and provision of appropriate accommodations;

5.     Standards. Take steps to improve state academic content standards and student achievement standards consistent with provisions in the America COMPETES Act, which provides for aligning standards with the knowledge and skills needed for success in credit-bearing postsecondary course work, 21st Century jobs, and the Armed Forces, without remediation; and

6.     School Improvement.  Ensure compliance with provisions in Title I, ESEA related to implementation of corrective action and restructuring options for schools identified for these interventions.

Which Seattle Private Schools Are Highest Ranked for 2023?