It's Friday night and I'm ankle-deep in shredded newspaper. It's crunch time for the big art show on Tuesday. My friends and I have exactly 72 hours to complete this pancake-themed minature-golf hole we're constructing out of paper mache. We finally got the physics of the goddamn short stack section worked out, and now it's late at night and we're rushing to slather the entire thing with ancient Strangers before we crash or run out of beer.

It was going well, too, until an entirely innocent question sparked Cyrus's oration on credit, foreclosure, and Bush's complicity in everything. I take the opportunity to finish mache-ing a cardboard butter pat, wash my hands, and head alone down the block to the all-night donut store.

The neon-haired girl behind the counter there looks me up and down. "Did you get in a glue fight?" she asks.

A few months ago, my East Coast friend William made a comment about Portland that rang so true it stung. "It seems like people there just work enough to make rent so they can spend their time painting cardboard and stapling it to telephone poles," he said. At the time I glared at him and hoped he was chafing in his Ralph Lauren sweater. But I think about that comment every time I look down and see another pair of my wanna-be young professional shoes stained with cheap paint or bike grease or organic cupcake mix. 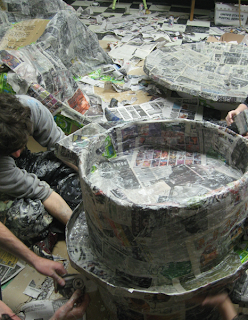 I pay for the donut—vanilla with froot-loops—and head back home where I announce to the gang in the living room that I need to get some some real work done. I should be upping my Google hits or revising my resume or something right now. But there is no leaving your friends behind in this town. Fetching my laptop in the kitchen, I find seven people or so sitting around the table and hanging out on the counters. The conversation here is even dorkier there than the economics lecture I left behind in the living room.

"Which one?" asks Nate while he rolls a thin joint next to my iBook. "Do you mean Seafarers?"

I live with between four and ten people—depending on the night—and I'm the only one who's "employed." I'm a  freelance writer.

Eventually, I scrunch down in front of my computer and turn up the music to drown out the sound of Battlestar Gallactica filtering up from the basement.

When I finally get to work on my resume, bits of paper mache cling to my knuckles as I type.
Filed under
Share
Show Comments