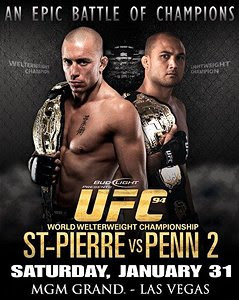 January 31st should have been a great day for the UFC. Ultimate Fighting Championship President Dana White called "UFC 94,"—the  latest UFC welterweight championship— "More than sold out."  Officials at the MGM Grand in Las Vegas had spent the day adding more seats to accommodate the 14,885 fans. The event pulled in $4.3 million at the gate, making it the largest gate total in the United States ever for the UFC.

The main event was a rematch of one of the best fights in recent memory between Georges St. Pierre and BJ Penn, two of the four or five best fighters in the world at any weight class. St. Pierre won their first meeting in March 2006 by split decision.  Fast forward to 2009:  Penn has moved down in weight to hold the Lightweight Championship, and St. Pierre reigns as the Welterweight Champion.

St. Pierre absolutely dominated Penn after the first round.  The fourth round ended with St. Pierre in side control, pummeling Penn with punches and elbows.  When the buzzer sounded, Penn could barely make his way back to his corner. That was when one of his cornermen told the doctor that BJ couldn't continue, and the ref stopped the spectacular fight.

But wait, Penn apparently wants to get punished by St. Pierre some more.


During the post-show press conference, White mentioned something the audience in the arena and at home didn't see.  After the first round, one of St. Pierre's cornermen applied Vaseline to his face, which is the only place it legally can be applied, then touched his back without wiping off his hand.  One of the Nevada State Athletic Commission (NSAC) inspectors saw it and reported it to his supervisor.  When it happened again after the second round, the official ran in yelling at St. Pierre's corner and wiped him down with a towel.  Penn even told the NSAC official at his corner, "He feels greased," following the first round

A few slow motion videos on YouTube show the incident.  It looks to me  like no big deal. I don't think a pinch of Vaseline—if it was even that much—explains how thoroughly St. Pierre kicked Penn's ass. Nevertheless, Penn's camp plans to file a formal protest.

Nine-time UFC Welterweight Champion Matt Hughes has since written on his blog, "I'm not the only one who has said that GSP felt greasy during a fight. I know Matt Serra has mentioned it and, even in their first fight, I think B.J. said something."

Penn's lawyer sent a letter to the NSAC, but they have yet to file a formal protest. Dana White has told the Commission they should ban the cornerman responsible. Finally, St. Pierre responded, "If there was any Vaseline left on his hand after he put it on my face, it was unintentional, and I do not believe it made the slightest difference in the outcome of the fight. Of course it's up to the UFC, but I would be happy to offer BJ a second rematch. I am confident the outcome would be the same."

The rematch would be huge: Penn would surely hype the "cheating" factor in the run-up to the rematch, and, historically speaking, big time UFC rematches do better business than the first fight.

The fact that BJ Penn wants to fight Georges St. Pierre a third time shows two things about the Hawaiian Brazilian Jiu Jitsu specialist: 1) He knows where the money is, and 2) He really did get a concussion if he would so flippantly accept a challenge from a man who absolutely destroyed him and sent him to the hospital in the process.
Filed under
Share
Show Comments