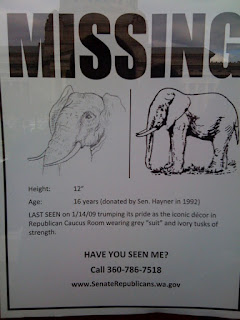 This elephant missing poster has gone up around Olympia where the Democrats have a near super majority over the GOP. But this isn't some sort of sly joke. It’s in earnest. A statue of an elephant was stolen from the GOP caucus room on the night of the Governor’s ball. (The Capitol becomes a drunken open house every four years after the governor is sworn in.)

The elephant  was a gift to the Republican caucus from then-Senate Republican leader Jeanette Hayner (R-16, Walla Walla) back in the early 1990s.

A witness to the crime has visually ID’d the thief  for the GOP from a security tape, but  the thief (no one knows her name) hasn't been found. The elephant—the Republicans just want the statue back—is still missing.

Here's a snippet of the security cam tape—PubliCola got its hands on the tape— where you can see the suspect slipping something that looks like an elephant under her sweater.