I spent the last month of my summer-long trip to Asia last year in Northern India.  It was a fluke that I ended there—I had intended on staying close to Varanasi, tracing the path of the Ganges.  But being a Western woman traveling alone, I was easy prey for travel agents.  A few cups of chai, and next thing I know, I'm flying to Kashmir and then taking a two-day bus ride to Ladakh.

Now that I'm fully back in my everyday life, it's my experience in Ladakh that I yearn to re-create—and the key lies somewhere between cooking and savoring.  Every morning I awoke to sun and a 9,000-foot view of the Himalayas with nothing to do but read, write, walk, and eat.  I had my pick of restaurants—all cuisines were available, despite the elevation and absence of vegetation.  But I preferred a predominantly Indian restaurant with rooftop seating and a perfect view.  On a typical day, I would arrive just as the naan was being taken out of the oven.  The waiters would spot me as I climbed the stairs, and like a scene from an old musical, they would line up with calls of "How are you this morning, Madam?  Good morning, Madam!" "Black tea, Madam?" and then escort me to my table, their line breaking away as we moved closer to my intended table.

I never had a bad meal there.  But, no disrespect to the cooks, the food had little to do with it.  Eating is only part of consumption, I've realized—only part of digestion.  What I was given every day this summer was the perfect storm of eating—leisure, beauty, fresh ingredients assembled on site, and care.  I would take two hours to eat my dal, rice and naan while reading, writing, and chatting with the waiters.  Often, it would be my one meal of the day.  That fact startles most friends—as I am known for an iron stomach and bottomless appetite.  But in Ladakh, something shifted.  In one meal, I had gotten everything I needed. 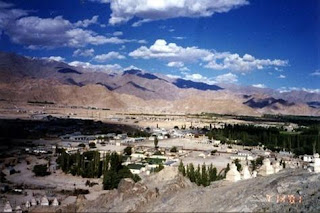 With my return, something has shifted again.  I have resumed my utilitarian relationship with food—one confined to lists and plans.  When I first got back in late August, I challenged myself to eat only once a day.  Then I moved on to eating all the food I missed.  Then, disgusted, I began making a rotating menu of dal—varying my lentils and vegetables. Then I reverted to the oldest of habits and ate out more and more.  When I did cook, the operating function was to make whatever would fill me.  All while ignoring that most of what I ate didn't feel good—in any way.

With the hindsight that the new year offers, I began to see that my dissatisfaction was not the result of what I was eating.  Rather, it was about how I was eating—and more importantly, how I was cooking.  As much as I love food and as much as I enjoy cooking food, it is only on special occasions that I truly immerse myself in the process—choosing ingredients with care, freestyling from recipes, losing myself somewhere between chopping vegetables and pulling the dish from the oven.

The food that I have been making since losing sight of my stay in Northern India reflected this lack of attention —no matter the quality of ingredients. Evidence from disasters in December still live in my freezer—sprouted wheat linguine with chard and pistachio pesto; Pad Thai with a ginger-heavy peanut sauce; innocent four-grain oatmeal with currents and walnuts.  These will never see the light of day again.  The care was not there.  Inevitably, these recipes gone awry were the result of Sunday nights where I was distracted by the details of the upcoming week, and so my focus was task-based.  I cooked to be done so I could eat and be done.  It was the complete opposite of what I experienced this summer.

So, with the promise of the New Year, I am trying once again--but, more importantly, not trying.  I go to the store and see what looks good, feels good, smells good.  And then I make the time to cook, the real way. Feet firmly on the floor, eyes open.  Full body, full focus.  I put myself in it, the same way I run or do yoga.  And the result tastes much better.

Keep up with PubliCola's Nerds: Monday was TechNerd;  previous installments of FoodNerd here;  and tomorrow, we debut SportsNerd.