A few weeks ago, amidst the post-Inauguration haze, two reporters from the radio show This American Life made a quick and apology-laced confession: They want our forty-fifth president to keep smoking. Quitting could summon the kind of high-profile, high-impact snafus that have brought earlier leaders and their blue dress bedecked interns to their knees. In their minds, smoking keeps our history-making president human, allowing a foot to reside in our world and granting some release from the extraordinary savior status that's been assigned him.

Recounting this to a friend earlier in the week, she summed it up this way: Smoking is Obama's shadow habit. Something that we all have and all need. It is not—as the phrase might suggest—something we hide from the light. Rather, like that dark image that follows us everywhere, it's a habit that grounds us in reality. It completes our identity. 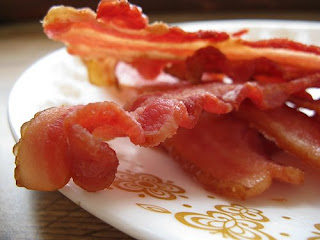 Eating bacon is my shadow habit. But I am neither embarrassed nor apologetic. In fact, the incongruity of my consumption brings a thrill almost equal to how I feel when actually eating it. There's little discrimination and few preferences. I'll take it any way—with scrambled eggs, chopped up in an omelet, inside a fried egg sandwich, or the current favorite: on top of a Belgian waffle layered with slivers of brie and fresh basil and a dollop of orange marmalade on the side. Just give me the grease and the crispness, and all will be well.


Like most habits, it wasn't always this way. Try as I may, I cannot extract any memories—good or otherwise—of bacon breakfasts from childhood. Despite the divorced dad weekends at Denny's or my mother's fondness for cooking breakfast as dinner on Saturday nights. The closest encounter would be my mother's frequent serving of Canadian bacon. But, like the American kids who travel abroad with Canadian flags sewn onto their packs, this form is an impostor—I always found it unwieldy and tasteless.

As most fateful decisions go, I can trace it back to a boyfriend. I met The Texan when I was still a vegetarian. Though I had lost the soapbox upon graduating college, I continued my bean and cheese dependency out of habit. I was broke and didn't know how to cook. Enter the Texan, a short-order cook who viewed eating meat as a practice in supporting states' rights. And thus, gateway began. Some chorizo here, some pulled pork there. An omelet with a surprise inside. It all went down easy. But the other troubles in the relationship led me to see that resisting his indoctrination into the carnivore world was one meager way to have control—or at least a voice.

I resumed a baconless life.

And then, nearly a decade later, came The Lawyer. With a subscription to Men's Health and a bench press in the basement, eating was enjoyed but monitored. Bacon was our Twinkie in the closet. Bought on the sly and relished but not eaten often. Just enough to feel reckless—though rationalized with a quote from the Atkins Diet scripture.

I have my own relationship with bacon now. Weekends are arranged around where and when. If I go to the nine o'clock Saturday morning yoga class, I can have a bacon egg sandwich afterward from the bakery next door. If I go for a run, I can stop by the bakery closer to home and eat their version on a croissant with tomato relish. Or I can skip the urge to multitask altogether and go get what I want. For as much as I believe in the importance of eating with intention and with a sense of connection, I believe just as strongly about saying Yes to whatever sounds and feels good in that moment. And lately, bacon—the candy bar of meat, according to a friend—is not something I want to tell No.