Downtown’s hotel boom has brought an attendant glut of new hotel restaurants. Some are good, others forgettable, and then there’s this tall, bright, and handsome dining room that borrowed its name from a colorful Seattle restaurateur of a bygone era. Transom windows and brass accents evoke a midcentury urban train station (the kind with a giant back bar) and the food matches the aesthetics: Americana comfort food, calibrated to modern-day sensibilities. Peppery bacon could be a stand-alone snack; instead it populates an action-packed wedge salad. Sesame honey adds surprise to classic fried chicken, and you gotta appreciate the server who gently nudges you away from your professed dessert order, and toward a majestic layered carrot cake. Ben Paris feels like a great Seattle restaurant that happens to be in a hotel; we’re still not over the custom wallpaper in both dining room and lobby, in patterns replete with civic talismans, like dungeness crabs and weed pipes. 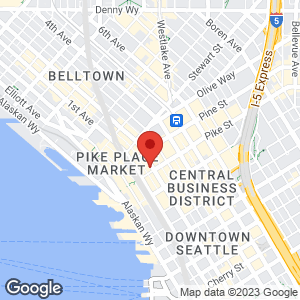 Aka your guide to the prettiest eateries in town.