There's been a lot coverage in the last week of a controversial article in the most recent issue Seattle Police Officers Guild newsletter, The Guardian:

From the Seattle Times:

A Seattle police officer, writing in his union newspaper, disparages the anti-bias training the city employees are required to take, and calls city leaders a "quaint socialist cabal."

Under the headline, "Just Shut Up and Be a Good Little Socialist," Officer Steve Pomper calls the city's 5-year-old Race and Social Justice Initiative an attack on American values and calls its supporters "the enemy."

He expresses contempt for a "Perspectives in Profiling" class that department members were required to take last year to raise awareness about racial profiling, and he questions at what point he and other officers should say "Hell no!" to the city's attempts to "indoctrinate SPD in social justice culture."

The article, written by SPD officer Steve Pomper, has drawn a lot of attention from news media, Mayor McGinn, the City Council and from within the department.

But does Pomper's article really really represent how cops feel?

"Sometimes I'll skim through The Guardian. The Guardian's a good paper. It gets out information we need," one officer told me earlier today. "In regards to that article, we all have our opinions. [But] We've got enough issues right now that we don't need to add any gasoline to anything. That was probably stupid."

This week, Councilmember Sally Clark took Steve Pomper, the officer behind the article, to task on her blog (bolds are mine):

I get a few newsletters in the mail and via email.  They’re often the best sources for what’s going on in a neighborhood or within an organization.  That can be true of the Seattle Police Guild’s Guardian newsletter, but the Guardian can also, from time to time, serve as a tool for people whose aim is provocation rather than information and critical thinking.  I’ve found plenty of helpful information about SPD staffing, technology, and accomplishments in the Guardian.  It’s too bad the good gets shadowed by articles like December’s “Shut Up and Be A Good Little Socialist.”  In the article the author goes out of his way (at least I hope it was a stretch) to cast himself proudly as opposed to the City’s efforts to help officers (and other city staff) think openly and critically about race in our city and in how we do our jobs. Even in a newsletter a good editor can be a writer’s best friend. In this case some healthy writer-editor debate might have helped avoid:

1.     Intellectual sloppiness – The author calls social justice a “socialist scheme” and pines for the good old days when communism and socialism were considered bad. OK, totalitarianism of whatever stripe is bad. Single-party, de-facto dictatorship is bad. Blind zealotry to a leader or ideal is bad.  Socialism as an economic organizing principle, though? Degrees of socialism run a spectrum depending upon the amount of state involvement in the economy and in provision of social programs. North Korean socialism (coupled with dictatorship) is vastly different from Norwegian socialism (coupled with a constitutional monarchy and parliament). “Social justice = socialist scheme” might be alliterative and sound nice when said out loud, but it’s sloppy thinking. If you think the City’s Race & Social Justice Initiative is brainwashing propaganda, maybe just say that.

2.     At least implied insubordination – First from the newsletter article: “I’m not conflating Seattle’s quaint socialist cabal with the brutal tyrants of the last century.” Phew!

(You can read the rest of Clark's post here.)

It's alarming that an authoritarian figure (a cop) who's supposed to have the trust of the public would call us—y'know, us lefty Seattle socialists—"the enemy," but I wouldn't take any of this too seriously.

I just can't get that outraged about this latest Guardian controversy because, really, this is nothing new. The guild's member newsletter prints some craaaaazy shit, and has for quite some time.

Take, for example, this cartoon from a 2007 issue of the Guardian: 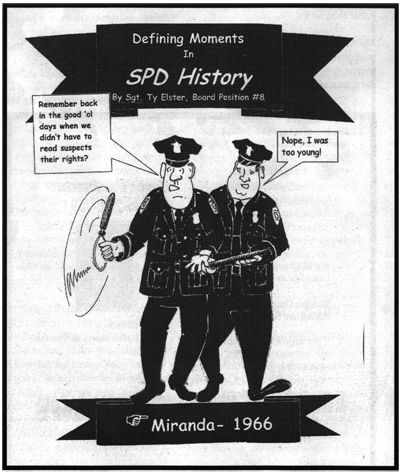 (You can see the whole series of cartoons here.)

But hey, maybe I'm being overly apathetic about this whole thing, so let's ask the big question:

Do pieces like this prove that there's a systemic us-versus-them rift between citizens and police in Seattle?

Well, we know at least a few of the Guardian's editors and writers hold beliefs which conflict with the values we, and our elected city leaders, have pushed for over the years.

But how do cops feel about The Guardian?

I called up several officers to ask what they thought of the controversial article, and the Guardian in general.

"I've always enjoyed reading the various articles that are in the Guardian," another officer told me. "While i may not always agree with some of the things in it, it's a good vehicle to see what some of the officers are thinking out there. But Pomper doesn't represent my opinion."

­­Another officer simply said of the Guardian, “It’s a novelty.”

Sure, that's a small sample of cops, but from talking to cops for the past four or so years, these responses are pretty reflective of how cops on the beat feel about the Guardian and our city's social values.